Look out for Restricted Traffic Zones (ZTLs) when driving in town. 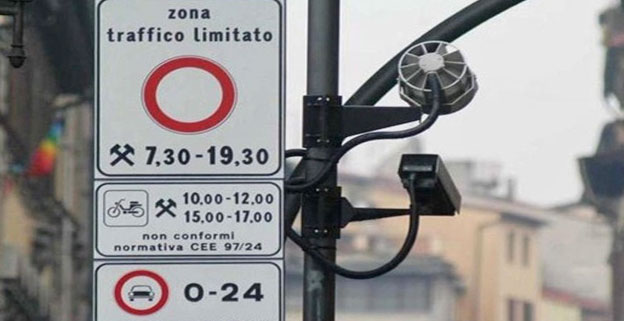 Most of Italy’s historic city centres have introduced Restricted Traffic Zones, where vehicle access is prohibited for non-residents. The aim is to reduce the pollution that is damaging the ancient buildings, and to create a better environment for pedestrians.

It doesn’t matter whether you are in your own car or a hire car, or even if you have booked an apartment inside the restricted zone: you are still not allowed to drive there.

If you have a hotel room booked, the hotel will often be able to arrange vehicle access by giving your car registration number to the police.

Italian ZTLs are not like the eco-zones you may have encountered elsewhere in Europe: it is not possible to buy a low emissions permit giving access to them. Only residents can obtain permits.

How do ZTLs work in Italy?

The system works like this: any vehicle venturing into the narrow streets of the historic city centre will have its number plate photographed. It is not always easy to tell where the ZTL begins, so look out for the signs as you approach town. They say ”Zona Traffico Limitato – ZTL” in Italian, and they look like this.

If your vehicle’s number is not registered with the traffic police, you will receive a fine of approximately €80. If you are in a hire car, the fine will go to the rental company, who will charge it – plus an admin fee - to your credit card.

Unfortunately, quite a few of our guests do get fined after they return home, through not having noticed the restricted zones - it is hard to tell where vehicles are allowed and where the restricted zones begin. You may not notice the camera flash, and the fine can take months to arrive, by which time people often don’t realise what it is.

It really is no fun getting a fine after returning from your lovely Italian holiday, and many clients call us feeling a bit perplexed, because they hadn’t noticed the ZTL signs and didn’t get stopped by the police. Unfortunately, though, the fine is valid.

Our advice is to leave your car in one of the large, marked car parks on the outskirts of town, and walk to the centre from there.
Or, in larger towns, jump on one of the little shuttle buses.

Once you have incurred a fine, there will be nothing Danitalia can do to help.

This is a list of towns and cities in areas where Danitalia has properties for rent and where visitors should be on the alert for restricted zones: