Think twice if you believe that Venice is the only city with canals in Italy – visit Leghorn!
During your holidays in the area we will recommend you also to pass by Leghorn. An autentic and less touristic part of Tuscany. 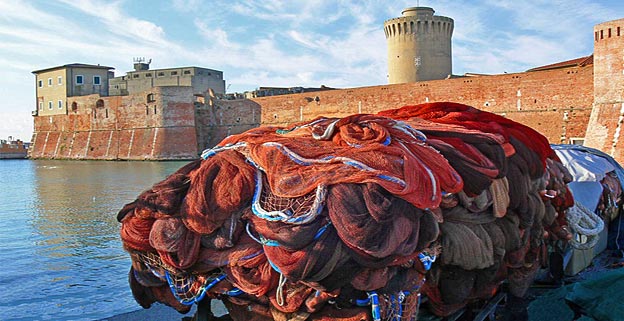 Leghorn is a fairly unknown harbour city not far from Lucca.

Back in the days when Leghorn was build up here were far more canals than today, but due to the city being plagued by malaria mosquitoes many of them were filed with soil.
It is possible to sail on those that still exist. The tours start from the harbour but do not expect to see any gondolas like in Venice.

Here it is little less organised and also not as romantic – Leghorn is an industrial city, but in here is a very original Italian atmosphere.

Everyday there is a big fish, fruit and vegetable market in the centre of the city. Do also take a stroll to the harbour to experience the life of the local fishermen.

When in Leghorn do try the local dish ”cacciucco alla livornese” – a spicy fish soup served on bread. It consists of minimum 10, if not up to 20, different kind of fish and seafood.

After the soup, instead of just plain coffee, try the “ponce” – a coffee with a special livornese liqueuer.